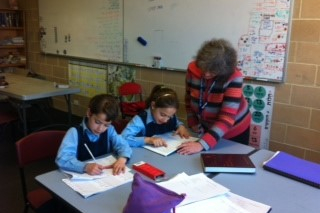 Yeshiva-Bet Rivka is one of a number of Jewish Day Schools in Melbourne and has a student enrollment of 1,300 students from preschool through high school. The school is known for its high quality Jewish and general education and its rich extra-curriculum program that offers a mix of afterschool activities and clubs. According to statistics, approximately 50% of Melbourne Jewish children attend Jewish schools currently – a drop of over 15% compared to 2006 statistics.

YBR students – for the most part – score well on national standardized tests and the school is consistently ranked among the top schools in the State. However, given its large student body, YBR also caters to students of all backgrounds and abilities, including a large number who have learning, behavioral and other difficulties that require extensive support within the school. Additionally, the school has a significant transfer rate of children – at every grade level – from secular schools in and around Melbourne. This number is increasing due to the new fee schedule which caps tuition fees based on family income.

Traditionally the new students have significant gaps in their Hebrew and Jewish Studies knowledge and require special instruction and tutoring to get up to speed. The project has developed an expanded “bridging” program for these students which provides intensive academic support at all grade levels. After testing to assess their knowledge, an individualized educational plan is tailored for each student. A group of qualified tutors provide one-on-one sessions, small group tutoring or a combination of both. Each student will receive between six and 15 tutoring hours a week for 18 weeks (one semester), following which they are integrated into regular classes, if they are ready. Even after the integration, the students will be monitored to ensure their success and will receive support as needed.

The newcomers are also invited to participate in separate morning prayer meetings as they work on developing the skills and confidence to join the larger school minyan. Another component of the program pairs new students with a “buddy” to support them socially as they meet their new classmates and get used to their new learning environment. Similarly, a family education program will provide Jewish educational and social activities for the students’ siblings and parents.